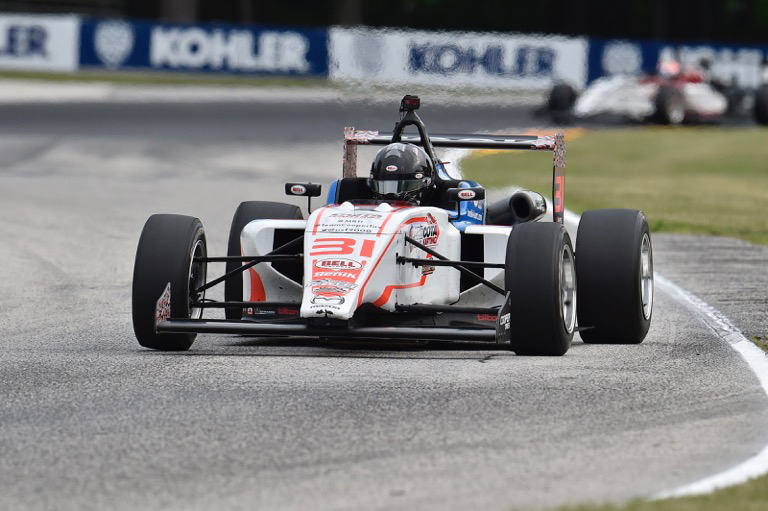 Competing at the iconic Road America facility in Elkhart Lake, Wisconsin, Team BENIK driver Sabré Cook had a challenging weekend in the Dairy State. Racing in rounds six and seven of the Cooper Tires USF2000 Championship Powered by Mazda, Cook closed the gap to the leaders but was involved in a pair of incidents, hindering any chance of solid results.

“It was disappointing not to be able to get the results that the team and I deserve,” explained Cook. “We have all worked really hard and the improvement has been noted. We had some bad luck this weekend but that is what happens in racing sometimes. We will all put our heads down and work even harder towards the next event.”

Starting race six from P23, Cook quickly advanced forward seven positions to move into the sixteenth position in the opening laps. Looking to continue her march forward, a slight off put her behind the competition as the yellow flag would fly. Bunching the field back together for the restart, Cook was able to make quick work of a few competitors before a single car incident took her out of the race.

“It was my first big hit in a car,” explained Cook. “I dropped two wheels on the exit of corner seven and spun across the track and into the wall with the left rear. There is a fair bit of damage but the Team BENIK guys were already working on the car before I was released from the medical center.”

Back on track Sunday morning, Cook started race two from outside row eleven but her race was short lived. Contact in the opening corner with a fellow competitor forced her to retire.

Cook continued, “It was disappointing not be able to race and gain more experience. Every lap I am unable to complete is a lap that I am behind my competitors. I am going to put this weekend behind me, put my head down and work hard towards the next one. I am not sure if we will make the event in Toronto, but definitely trying to find the funding to head to Canada as well as finish the rest of the season.”

Continuing to raise money to compete in all 2018 Cooper Tires USF2000 Championship Powered by Mazda events, Cook has launched a unique initiative via her Go Fund Me with a direct link from her website. Offering autographed hero cards and more for a small donation, Cook has already raised more than $4500.00 as she looks to continue to finalize funding for the remainder of the season. For more details and to help Sabré Cook achieve her goal and please visit: http://www.sabrecookracing.com/donate/